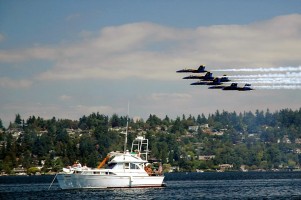 Mercer Island was first settled by non-natives in the 1870’s. It was named after early visitors, the Mercer brothers, who rowed from Seattle often for berry picking, hunting and fishing. The first large settlement was on the northwest side of Mercer Island, called "East Seattle". C.C. Calkins built a resort, the Calkins Hotel, in 1889 in East Seattle. This resort led to the development of a ferry dock (Calkins landing), which in turn led to a growing population. While the Calkins hotel burned to the ground in 1908, the ferry service continued, and a small business district pros-pered. In the 1930’s, George W. Lightfoot began campaigning for a bridge to Seattle. The Lake Washington Bridge was built in 1940, and this spurred the move of the business district to its present location.