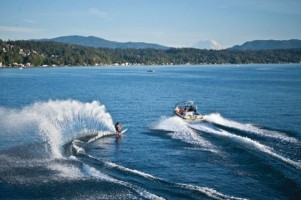 Rising from the eastern shores of Lake Sammamish, nestled between Issaquah and Redmond, is the city of Sammamish. In the past 35 years, this suburban community has grown from a population of 6,000 to nearly 50,000 residents, yet it still retains it’s rural look and feel. Incorporated in 1999, Sammamish is taking shape as roads, parks, and other city infrastructure are designed and built.

This city is conveniently located within easy commuting and shopping distance to many larger cities, including Bellevue, Redmond, Issaquah, and Seattle. The tree-lined streets and well-groomed neighborhoods make it an ideal community in which to raise a family. Sammamish, a "kid-safe, family-friendly community" has one of the highest percentages of children under age 18 in King County.  Area children are well served by two distinguished school districts within the city limits: Lake Washington and Issaquah. The Sammamish Youth Board and others promote a variety of organized youth activities.

Upscale neighborhoods, like Sahalee with its tight covenants and private security patrols, as well as an assortment of residential neighborhoods are located in and around Sammamish. "The Plateau," as it is commonly referred to, is developing at a dizzying pace as its popularity and land value increases.  Sahalee Country Club hosted the PGA Golf Championship in 1998 and the NEC World Golf Championships in 2002. In addition to golf, Sammamish is full of recreational options like fishing, swimming, boating and more. One of the local parks, Pine Lake Park, is the site of the annual Summer Nights At The Park series featuring concerts and plays.